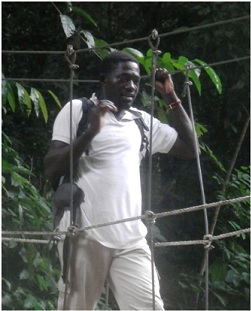 - 1999: the European Union funds the building of a site immersed in the gabonese forest whose objective is to create important revenues issuing from ecotourism while reducing at maximum environmental human impacts. Revenues will be destined both to the National Park management and to the development of local communities. Young gabonese people are recruited to work in the forest site where will be conducted an ecological monitoring and a gorilla habituation programme. The Conservation Centre of Mikongo was born!

- December 2012: the most wanted legalisation act of Association MIKONGO'VISION by Ministère de l'Intérieur has finally arrived! Unfortunately, after three difficult years, many members left the Association for more stable jobs. MIKONGO'VISION is legalised but must also rebuild itself with deeply motivated people. The real struggle begins.

- October 2013: our website is finally on the net! Flyers have also been printed to reinforce our "advertisement campaign". We hope that this website will allow us to be more visible in the world and to attract many people wishing to discover the wild forests of Gabon.

- January to September 2014: ANPN (National Parks Agency) and WCS (Wildlife Conservation Society) organise a training session which will create a real status for ecoguides in Gabon. Ghislain and 14 other people participate.

We make a call to any organization or firm able to finance, fully or partially, our project (training of new ecoguides and gorilla habituation).